You are here: Home / Disability Awareness / A Perspective on Deaf History in Minnesota 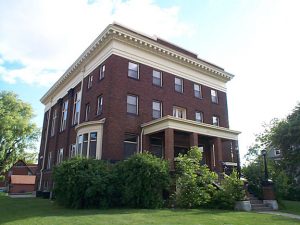 I have fond memories as a Child of Deaf Adults (CODA). I attended Minnesota Deaf Campers events across the state and Minnesota Association of Deaf Citizen meetings at St. Paul’s historic Charles Thompson Hall. I am proud of being raised in the Minnesota Deaf community, a community with a rich history.

Charles Thompson Hall has significant historical value for the Deaf community. The building was designed by Olof Hanson, a Swedish immigrant who might be the first Deaf American architect. (He also graduated from the Minnesota State Academies in Faribault.) The Hall has wide hallways, allowing people to see – and communicate with each other – more easily. Before video phones and texting, Charles Thompson Hall served as the nation’s first Deaf club and a home for Deaf society in Minnesota. Hanson went on to design buildings for Gallaudet University.

Our state is also home to the Minnesota Association of Deaf Citizens. Established in 1885, the Association advances the rights of Deaf, Hard of Hearing, and DeafBlind people. It provides access to language, education, and a larger linguistic and cultural community.

The Minnesota State Academies in Faribault provide quality education to Deaf, Hard of Hearing, DeafBlind, and Blind students from across the state. The Academies were established in 1863, long before such education was legally required.

Long-time St. Paul resident Dr. Bobbi Cordano was the former Vice President of Programs for the Wilder Foundation and former Minnesota Assistant Attorney General. She was appointed as the first Deaf female and LGBT president of Gallaudet University in 2015. Gallaudet was the first four-year liberal arts university in the world for the Deaf.

These are a few reasons why Minnesota is special to the Deaf Community – and why we proudly celebrate Deaf History Month in the state!

David Dively was born a CODA with two Deaf parents and became hard of hearing later in life.

Sign up for the latest MCD news and updates sent to your inbox.